FEBA family is growing; Romania has become our new associate member. This collaboration was officialized during FEBA Annual Convention, on 16 May in Rome. We took this chance to ask the point of view of Gabriel Sescu, President of the Food Bank in Romania.

Can you tell us a bit more about Banca Pentru Alimente?
“In my youth I studied to become a social worker, and after 20 years working in Caritas Romania I was involved in many social programs. It happened that in the spring of 2006, among other non-profit organizations, I attend a meeting organized in Bucharest by two delegates from FEBA. They were curious to know why there was no Food Bank in Romania and why there was no support and interest in this matter.

Ten years after, in February 2016, willing to do more for the deprived people who were facing poverty in my country, I started looking up and seeking similar initiatives in Romania, when I realized that the FEBA meeting from 2006 didn’t reach the desired goal, as the participating NGOs had their own private interest in this matter. They could not agree to a common ground to start building a Food Bank meant to help all of them, and instead they wanted a Food Bank serving their own projects. So, each NGO followed separate paths to find the resources they needed and somehow failed to create such a project.

Seeing all the countries with Food Banks on the FEBA’s map, I decided to write to FEBA and ask for advice for starting the first Food Banking project in Romania. I first discussed the project with several friends and co-workers, to know if they were interested to involve and sustain the initiative. Thus, following FEBA’s principles, the project Association Banca for Collecting and Distributing Food (Asociatia BANCA pentru Colectarea si Distributia Alimentelor) started with eight people (all volunteers), in July 2016. At the beginning, the work was very challenging as I had to use my personal finances in order to start the project as soon as possible. In October 2016, we managed to obtain all the legal documents and the initiative became functional. Using all my personal resources, in November 2016, we officially launched our project, during a press conference organized at the Romanian House of Commerce, in Bucharest. We were delighted that two delegates from FEBA could attend the event and ensured us with all their support. The event managed to gather important representatives from the Parliament, local authorities, Ministry of Agriculture, and NGO’s working directly with disadvantaged people, that have gladly embraced our initiative, as they desperately needed the support of a local Food Bank.

Also, in the first months of its existence, the Romanian Food Bank made several steps in completing a database, with at least 24 NGO’s which needed our support in helping the people in need. After several months, we managed to approach the companies in the food industry, trying to explain to them the advantages of helping a Food Bank. As a new and unexperienced organization, it was quite challenging for us to deal with the great retailers and food industry companies, which seemed extremely reluctant in the first stage. However, we managed to succeed at last.”

What are the main challenges that your organization is facing? What are your goals for the future?
“At the beginning, the main challenges were the lack of financial resources or poor funds, that forced us to operate only in Bucharest and its surrounding areas: Ilfov and Prahova, as we didn’t have the necessary resources (logistical or financial) to start a nation-wide spread Food Bank network. So, we first started to deliver food to NGO’s which weren’t financed by the government and desperately needed our support. In the last two years, a bad political decision in Romania reduced the number of NGO’s due to the lack of government support for these organizations. In 2018 there were even public protests because the government has reduced the support of social programs like therapy centres for disabled people or programs of social economics run by NGO’s. The support that we are now offering is to help these NGO’s to keep functioning and try to keep their social inclusion programs. One of our goals is to help NGO’s which can have social programs like canteens for the people in need and to help these people by providing daily food.

Another challenge for us is that the local municipality in Bucharest wants to have its own Food Bank and is willing to spend 15 million euros in the coming years for this project. Unfortunately, their project is run by political decisions and is not targeting the real social cases. As they have a political structure, it will be difficult to be transparent about were the food will go.

Regarding our goals, I have to emphasize that after just eight months of activity in July 2017, we started with 25 NGO’s and 6 donors, and by the end of 2018 we managed to help 72 NGO’s with over 18.000 beneficiaries to which we provide products received from 18 companies. In figures, the 2017 year meant collecting around 57 tons of food which was started from the second half of the year. In 2018, we managed to gather over 212 tons (equivalent to over 600 mc square of delivered items, with an estimated value of over 680.000 euros) and in the first 5 months of 2019 we have already collected over 282 tons, as our goal was 350 tons in total by the end of the year. We managed to achieve all these results, with three employees: a manager (my position), the clerk and a warehouse employee, and with the help of 20 volunteers.

An important goal for me in 2018 was to identify people from other cities in Romania willing to start similar local projects, as our Food Bank. This was a quite challenging activity for me, as I had to visit different cities in Romania and meet people with different backgrounds, having different interests that animated their different projects. I found it quite challenging to convince them to join our mission and to create together the foundations of a new association in order to become a national Federation of Food Banks. However, my efforts were fruitful, as currently, in Romania, other two similar initiatives are active: one in Cluj (since October 2018) and another one in Roman (since December 2018). We now recommend the companies that we work with to also collaborate locally with the newly established projects if the companies have a surplus in their area. This year, we plan to extend new projects in other cities, such as Timisoara, Brasov, Galati and Oradea. By 2020, we plan to have six functional local Food Banks, in order to help a greater number of deprived people.”

Why was it important for you to become an associate member of the European Food Banks Federation (FEBA)?
“Since the beginning, I was extremely interested in FEBA’s model, and I felt challenged to re-create in Romania the pattern, similar to those already functioning in states with decades of experience in collecting and distributing products through Food Banks. Thus I wanted to quickly adopt FEBA’s principles because I think it is extremely important to learn from the most experienced ones and from a successful project rather than trying to reinvent the wheel. Let's not forget that we are at least 35 years behind FEBA’s first network of Food Banks in Europe, so we definitely had to learn from the best. Moreover, becoming an associate member in 2019 meant that our efforts, for the past three years, were officially recognized at European level. This was for us a vote of confidence coming from a European organization that never ceased to believe in our ambitious project, after several monitoring visits. And for that, we will always be grateful for FEBA’s representatives.”

Now that you are an associate member of FEBA, what has changed or is still changing for you?
“This recognition shows us that we are on the right track in what we do and that under the coordination of FEBA we have the chances to be a sustainable Food Bank in a short time. The concrete benefits of this status: now we can easily access FEBA’s expertise, accumulated in decades of hard works, we can benefit from FEBA’s recommendations, regarding their business partners which are active in Romania as well; everyone collaborating with us now has the certitude that we follow and apply FEBA’s principles and we work under its close monitorization.”

What are you expecting from being an associate member of FEBA in the future?
“In order to grow as quickly as possible and to become more efficient and competitive in collecting and distributing food from stocks and surpluses and reducing food waste, a local Food Bank as the one in Bucharest needs FEBA’s extensive experience and its best practice examples and successful stories of its members.
Based on the realities of the Eastern Europe, there are important differences in the Food Banks’ functionality. The Balkans and the East have the weakest structures, collecting small amounts of food, even if the need for food is much higher here, as the rate of poverty is sometimes overwhelming. That’s why countries from this region are in great need of FEBA’s help and coordination, in order to have well-organized structures. Moreover, with the financial support of the EU funds, these Food Banks will have the opportunity to build modular warehouses that can keep all kinds of food; faster means of distributing the surplus food. We should not neglect any possible support through partnership projects between Western and Western Food Banks to grow by benefiting from their experience and support for new Food Banks.

Another important aspect is the one related to the advocacy campaign in the legislative/ normative area of reducing the food waste. In Romania Food Banks are not accepted for collecting products on the basis of food waste law, thus the activity is not recognized on this level. In addition, there is another problem that may be solved based on FEBA members experience: the "best before" products are assimilated with those that expire on that date and are thrown the day after.

We strongly believe that, with baby steps, we will create a network of regional Food Banks and a national Federation in Romania, to help reduce food wastage and poverty." 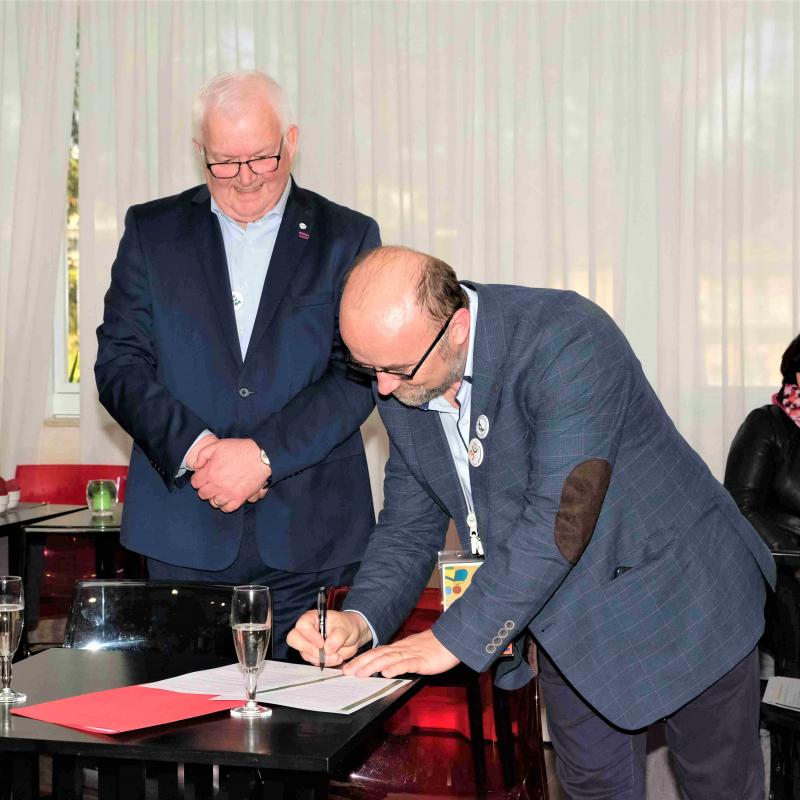